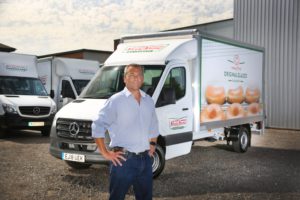 Before Praiso was implemented Krispy Kreme’s National Transport Manager, Ben Povey, identified driver behaviour as an area of focus. Krispy Kreme holds driver safety and well-being above all else, as Ben explains, "It's always safety first. We encourage our drivers to arrive at their locations safely, with a smile on their faces to deliver fresh doughnuts to our valued customers." However, it was a challenge to maintain a reliable and effective method of communication with his team, the service Krispy Kreme used previously provided Ben and his team with several sophisticated KPIs and data tools, but it lacked efficiency at getting the vital information to their drivers quickly.

Ben said, "It was more time consuming and less effective" because the process was heavily reliant on two people being in the right place at the right time. Supervisors wanted to streamline the communication process to their drivers, so they received support and up to date information efficiently.

What other challenges were you trying to solve before Praiso was implemented? “As all our drivers work remotely, the challenge was to engage with them to share their driving style results with them at the end of their shift to aid in improving their driving skills. Praiso provides us with this solution while also enabling us to maintain personal contact with them, which is even more important at this time.”

Harmonising the balance of driver risk and keeping drivers engaged, can become a tough juggling act. Ben explained that their transport team would regularly create performance league tables to encourage friendly competition between drivers. The league table would be displayed in each transport hub; however, the process was far too time-consuming. They would often be outdated and GDPR meant personal information couldn’t be displayed so freely. Ben would share the league tables with his team by email, but it was a challenge to get the information to the front line.

However, since implementing Praiso, The Wall of Legends performance league table has encouraged Ben’s fleet to compete with their teammates to be the best, safest and most motivated drivers in the business. The bonus scheme which rewards the top performers closes the circle and incentivises drivers to push themselves to be the best they can be. Ben says that "once a driver is in and they see their Praiso Score the fuse is lit". Since taking on Praiso, most of Ben’s fleet are achieving the top spot on their respective leader boards, as ‘Master Drivers’.

Ben was originally introduced to Praiso by a network connection within the industry, initially, he was intrigued to find out about Praiso's performance measurement KPIs, which included three essential measurement areas Speeding, Braking and Cornering. However, when Ben discovered the Driver Engagement element he said, "That was the game-changer." Ben trialled Praiso across four of the transport hubs, Enfield, Glasgow, Heywood, and Tipton.

We were keen to discover if he encountered any challenges getting the drivers fully invested, but Ben said, “The system was best received at the hubs where transport supervisors understood the benefits, which helped to get the drivers onboard.” Ben mentioned that his team at the Enfield hub “is a shining example of how engaged teams drive positive change. The Enfield hub was one of our most challenged hubs and it is now amongst the best-performing in the business.” It’s inspiring to see that his fleet are more engaged than ever through the use of Praiso’s digital driver coaching portal and app, ensuring a positive change in driver safety, behaviour, and well-being.

Ben also highlighted that not only has Praiso ensured safer driving behaviours for Krispy Kreme’s employees, but “they drive their own cars in the same style as they would their work vehicles”. So, the message gets through resulting in safer road users whether driving professionally or personally, which is an outstanding accomplishment.

Before implementing Praiso, driver engagement was immeasurable for Krispy Kreme, now Ben and his team have full transparency of coaching and training that his fleet always have access to. Praiso gives assurance that when near misses occur, both the Transport Supervisor and the driver, are notified in real-time; ensuring that driving behaviours are acted on instantly and the individual is being coached in line with their unique individual training requirements. Transport supervisors now spend their time focusing on operational excellence, using Praiso to identify any drivers that require additional support and encouragement to perform at their best. Ben said, "I want our drivers to feel protected, safe, invested in and as though we have their back."

Ben commented saying, "Praiso has become part of the Krispy Kreme culture, it is simple and straight forward to use compared with the previous system we used. It saves a lot of time training new team members and for the user, it just makes information a lot easier to find. Our drivers are now fully aware of their performance and position on the Wall of Legends, whereas before there was sometimes a delay in getting that information to the front line.”

Krispy Kreme has seen a 6% reduction in fuel spend, reduced wear and tear, and road traffic incidents, which are direct results of individuals changing their driving style and behaviour through Praiso. This takes care of the driver’s safety and well-being but simultaneously continues to protect Krispy Kreme’s brand reputation.

Ben said, "Looking at our average score across the fleet today, it’s the highest score we've ever achieved. It makes me feel proud and it's great knowing that our fleet of drivers are delivering smiles to our customers, whilst driving safely."

Praiso has elevated Krispy Kreme's commitment to road and employee safety. Krispy Kreme cares a lot about their drivers and this is shown through their decision to put safety first by implementing Praiso. This has not only benefited their business, but Praiso has had a lasting positive impact on their people’s culture inside and outside the workplace. Its’s a win, win!